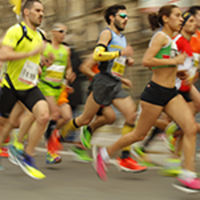 The 5K starts along the historic Yorktown waterfront, proceeds by Cornwallis' Cave and the Yorktown Victory Monument, and finishes along the waterfront. The 1 Mile Fun Run is entirely along the flat and fast Yorktown waterfront. Parking and restrooms are available.
The 5K will be a Colonial Road Runners Grand Prix Event, a Hampton Roads Super Grand Prix Event, and the final race in the 2020 Historic Triangle Triple Crown Series (the other 2 races being the Democracy Dash 10K at Jamestown Island on August 29 and the Run the D.O.G. Street 5K on September 5). Participants who complete all 3 Historic Triangle Triple Crown races will receive a specially designed medal.
All proceeds benefit the LL12 Foundation, in memory of Logan Koontz. Logan was a sophomore at Tabb High School who was killed in a tragic car accident on October 26, 2019, leaving the homecoming dance. He was a talented student-athlete who loved life, sports, clubs, church, cruising, and his family. Logan was involved in sports from a very young age including swimming, lacrosse, baseball, and football. He won multiple awards and was on many championship and all-star teams. Logan played football, basketball, and baseball for Tabb Middle School and again was part of several championship teams. In high school, Logan made Varsity Football his freshman and sophomore year (where he wore #12), played JV Basketball his freshman year, and was a standout in Varsity Track as a freshman (region runner up in the  800m, all-state 800m, 4x800m, and  4x400m, part of the 2019 Tabb Boys Outdoor Track Region and State championship team, and posted a 2:00 in the 800 meters qualifying for the freshman division at Nationals where he finished ranked 12th). Logan was also involved in ROTC (he loved the American flag and his country, and desired to be a Navy Seal or a JAG Officer) and clubs such as Key Club, Unified Tigers, FBLA, Relay for Life, and Y-Street. The LL12 Foundation raises money in Logan's memory to provide scholarships for student athletes, help athletes with things such as camp fees and by providing equipment, support the ROTC program, and educate young people on the necessity of safe riding and driving precautions.
The event raises money for a great cause and is near local museums, historical sites, national park battlefields, shopping, restaurants, and the beachfront. There will also be ample post-race refreshments, food, and drink (fruit, bagels, granola bars, water, etc.), raffle and door prizes, awesome race t-shirts, and an awards ceremony.