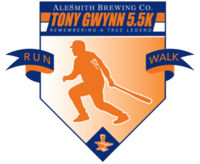 Join AleSmith Brewing Company Father’s Day Weekend as we run/walk 5.5 kilometers to pay tribute to Tony Gwynn, a hall of famer, coach, teammate, and father. Nicknamed “Mr. Padre” for his unfaltering commitment to his hometown, Tony is considered one of the best and most consistent hitters in baseball history. Funds raised from this event will support the philanthropic work of the Tony & Alicia Gwynn Foundation (TAG).

Starting and finishing at AleSmith’s brewery, this 5.5 kilometer course will weave through the streets of Miramar (aka Beer-a-mar) with an optional beer-fueled pit stop at Mikkeller SD. Why a 5.5K? Tony Gwynn was known to hit balls between the third base and shortstop, which was later dubbed as the “5.5 hole”.