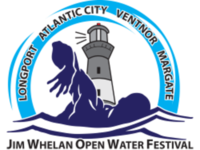 *Participants wearing wetsuits are not eligible for awards/prizes or GSS points.

The 3rd Annual Jim Whelan Open Water Festival, featuring the 56th Annual Around The Island® Swim, will be held on Tuesday, August 9, 2022 in and around Absecon Island, NJ, which is made up of the cities of Atlantic City, Ventnor, Margate, and Longport.

"Honoring nostalgia in service to our community."

Through our efforts and the generous support of our sponsors, we continue to accomplish our two main goals:

To increase awareness of "Whelan Whales"--a free swim lesson and water safety program for the children of Atlantic County. Honor the historical significance of the Around The Island® Swim to the Absecon Island community and generations of lifeguard families.

We are even taking it a step further this year by expanding our water safety program to include a lesson on riptides in the Atlantic Ocean.

The history of this legendary marathon swim began back in 1953 when two ACBP members, Ed "Dutch" Stetser and Edward Solitare, made a $100 bet to see who could circumnavigate Absecon Island first. It was Solitare who won, completing the grueling course in 13:30, with Stetser only an hour behind him. Throughout the following half-century, numerous international open water swimming athletes competed in the race, which was eventually called a "world championship ocean marathon."

The Around The Island® current record holder, as documented on marathonswimmers.org, remains Stéphane Gomez, from France, set in 2004 with a time of 6:37.09. The winners from the 54th Around The Island™ Swim in 2019 are:

What will you be doing on Tuesday, August 9, 2022? Will you become a part of history? Will you support a worthwhile cause? Do you want to challenge your open water swimming skills? Register to participate in the 3rd Annual Jim Whelan Open Water Festival, featuring the 56th Annual Around The Island® Swim!

SPACE IS LIMITED to SELECT A FEW!

A committee of open water swim coaches, swimmers, and professionals will be choosing from the best resumes.

Looking for the Entry Requirements?

All Entry & Eligibility requirements for the 56th Annual Around The Island® Swim is found here.

The 56th Annual Around The Island® Swim will be held at the Atlantic City High School Boat House (3401 Fairmount Avenue, Atlantic City, NJ 08401).