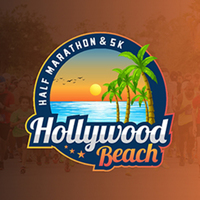 *REGISTER DIRECTLY ON HOLLYWOODHALF.COM FOR THE BEST RATES!

​The events will feature a start right near Hollywood North Beach Park. Runners will be able to watch the sunrise over the Atlantic Ocean shortly after the 1 mile marker. Hear the sound of waves crashing as you run just steps from the beach!

Runners will run along the picturesque Hollywood Broadwalk for miles as the sun comes up until turning onto South Surf Road for a short section in an eclectic area. A quick U-turn takes athletes back heading north on the Broadwalk with a good opportunity to see how your friends are doing amid magnificent views of the Atlantic Ocean.

The course then takes runners to North Surf Road to again run parallel to the Atlantic, running through a shade tree tunnel before starting a second loop. A beautiful finisher's medal for both the half marathon and 5k plus lots of snacks await at the finish line!
You will also get a close up tour of the best that Hollywood Beach has to offer. Both races are also a part of the very popular South Florida Half Marathon Tour!