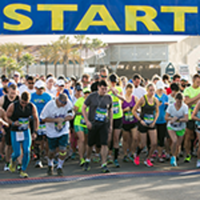 You will not experience a more fun, exciting skating weekend as the one we are planning for you in one of America's greatest cities, San Francisco. The action begins on Friday, July 8 with the San Francisco Friday Night Skate. For more than 25 years this rolling skate tour /party has been rolling through the City. You’ll skate through the sights like Pier 39, Fisherman’s Wharf, Ft. Mason, the Palace of Fine Arts. Union Square, the Bay Bridge lights and more!!! On Saturday we take the action indoors at the Church of 8 Wheels, San Francisco’s Roller Disco. This place is being called the greatest roller disco in the world!!! The building is a 125 year old Catholic church. It was damaged in the 1989 Loma Prieta earthquake and sat empty for nearly a decade until we came in and transformed it into one of the hottest night spots in San Francisco. The event expo will be here during the day and a fantastic roller disco party that night.Sunday is race day. After the race we will meet up at Skatin’ Place in Golden Gate Park for the awards presentation, picnic and the dance skaters performances in the Skaters’ Showcase.