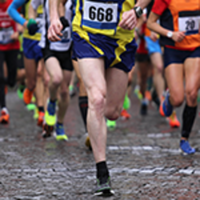 The ASD Cagliari Marathon Club together with the association ASMA Sardegna ONLUS, the County Administration Committee,  the Town Sport and Education committees, the University Hospital and the County Doctors Association, the Molentargius-Saline Park Committee and FIDAL, is proud to present:

A walk in the history and natural landscape of Cagliari

Runners who will take part in CagliariRespira’16, on the first Sunday of December will not only take part in a social and fun local initiative, but also have the chance to admire some of Cagliari’s famous wonders such as the beautiful Sella Del Diavolo, Poetto’s seaside, Molentargius park and its tropical pink flamingos, and finally medieval Castel area.

The competition, which is open to everyone, will take place along a flat and fast itinerary consisting of one long lap which will be completely closed to traffic. Runners will be able to choose the running distance most suited to them among the following 3 options:

The half marathon, single and relay, will guide you through some of the most evocative and spectacular parts of Cagliari: Via Roma which hosts Cagliari’s town hall, the historic neighbourhood of Stampace, and Carmine’s Square and Largo Carlo Felice, which will then lead runners back to Via Roma, our city’s living room as we like to call it.

Athletes will head towards the seaside through the slightly inclined Vittorio Bridge. Runners will run past the whole length of Poetto’s seaside, all the way up until the Saline area. We can imagine you will be tired at this point, however we strongly recommend using some of the energy you have left to take a peek at the surreal Sella Del Diavolo with the Marina Piccola port at its feet.

Competitors will have the chance to admire the unique Molentargius Park which still shows evidence of the sale extraction activities that used to take place in this area, and is now become the natural habitat of a number of species of animals such as the pink flamingo. At the end of the park you will get into the bicycle track which will guide you to Sant’Elmo’s dock. After running through Marco Polo’s square you are almost done, 20th Km. The last segment of the run will be surrounded by spectators who will support and cheer for you until the entrance of the Coni Stadium.

The Kidsrun will take place in the great blue track of Coni Stadium and it’s designed to allow children to get a glance at the world of running, hoping this will lead to them picking up this beautiful discipline on a more regular basis. Kids will be able to choose among the following distances: