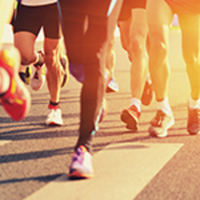 Running League is the first league for runners, ever... Blam! We run hard and then celebrate even harder. Every other week, teams of 3 race against one another in epic battles to be the "Champions of the Universe." Every runner establishes a 5K average time that is used in the battles to even the playing field. This allows for runners of every running ability to compete head to head every race. Running League celebrates the runners who improve the most, the runners who run faster than their average, the runners who harness their "runner's high" for great after race festivities. Along side beverages, we award money and prizes in a fun after race party.

Running League is raced around Milwaukee and the suburbs. The course terrain is both road and trail. Race time is 6:00pm every other Thursday with the after race party immediately following the race. Each course we race has ample parking. Running League provides post race beverages and also encourages runners to bring what they like.