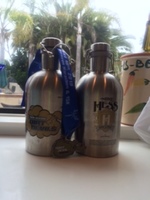 Stairway to Heaven Half Marathon and 15K

If you plan to do the Half Marathon or Progressive Series you MUST run all FOUR races depending which series you are competing in.  The Progressive Series kicks off with the Foxy 5k in April, followed by the Wildhorse 10k in June, then this Stairway to Heaven 15k in August, and finally the Raptor Ridge Half Marathon in October.  The Half Marathon Series takes place the same days with the Foxy Half in April, Wildhorse Half in June, Stairway to Heaven Half in August and finally Raptor Ridge in October.

If you are NOT doing the series and just want to run a great Half or 15k trail … then this is an amazing and challenging trail.  It sold out a month in advance last year, and we expect the same this year!