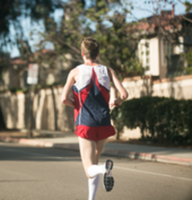 Do you recall where you were on September 11, 2001? Most Americans and millions of people around the world experienced the terrorist events unfolding live on television, radio, and the internet. The dramatic coverage seared that day into America’s national consciousness.

At 8:46 am on September 11, 2001, terrorists hijacked and crashed a passenger jet into the north tower of New York City’s World Trade Center. Fire and rescue crews rushed to the scene. As live television coverage began, Americans watched in horror as a second plave slammed into the south tower at 9:03 am. Thirty-five minutes later a third airliner dove into the Pentagon right outside the capital. A fourth jet, bound for Washington D.C., crashed in Pennsylvania. The nation reeled, but resolved to fight back.

Remembering all who have fallen on that fateful day 18 years ago.
Proceeds benefiting Veterans through Team RWB and the Marion Police & Fire Departments