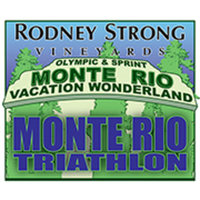 We'd like to invite you to join us for the fifth annual Rodney Strong Vineyards Monte Rio Triathlon!  In the first four years of the event we have seen a lot of growth, going from 400 participants in year one to being sold out at 1000 participants in year three and four! The Monte Rio Triathlon will continue to have the Sprint distance triathlon along with the Olympic distance race. This gives an option to anyone new to the sport!

In 2012 when we were presented with the opportunity to stage an Olympic Distance Triathlon in such a beautiful area, we jumped at it. The 1.5K Swim, 40K Bike and 10K Run was the perfect distance for an early summer race, and Monte Rio's old-fashioned summer vacation atmosphere makes it the perfect venue. With the addition of our Sprint distance race, it is now even better!

In the heart of Monte Rio, a 1950's style neon sign spans the road, reading, "Welcome To Monte Rio, Vacation Wonderland."  The backdrop of thousand year old redwoods, the lazy Russian River, and the timeless beauty of Sonoma County's coastal river region, is reminiscent of a family vacation you took as a kid.  Remember the one where you loaded up the station wagon with camping gear and your entire family?  Every morning you ate pancakes outdoors then you spent your days skipping rocks.  Now, fast-forward forty years, add a state-of-the-art triathlon, and you have the recipe for creating a new memory, with an old-fashioned flavor.

The swim will be staged in the Russian River, just four miles downstream from Johnson's Beach, the venue where the other Vineman Triathlon events have been held for more than two decades.  The  bike course follows the Russian River and travels through the old growth redwood trees. Those competing in the Olympic distance race will also ride out to the picturesque coastal town of Jenner and back.  The run is held on the course that once was the home of the Moscow Road Race, a popular run from the running boom days of the 1970's.  The run course is flat, fast, and shaded almost the entire way.

Load up your SUV with your race gear, bring along the family and plan to spend a couple of days in the Russian River Valley.  Monte Rio awaits!

Please go to www.vineman.com for full details and race schedule.