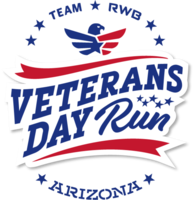 Whether you are a competitive runner looking for a new PR on this fast, flat course, or you are ready to run your first event, or just looking for a fun, family activity on a beautiful Saturday morning, all ages and ability levels are welcome!

A Portion of the proceeds will go directly to Team Red, White and Blue.  Team RWB’s mission is to enrich the lives of America’s veterans by connecting them to their community through physical and social activity.

​This event is limited to 700 participants.

Can't make it to this year's event but still want to participate? This year will feature a Veterans Day Run Virtual Race. A virtual race is a race that can be ran at any location. You can walk, use the treadmill, run outside or participate in another race. You can run your race at your pace wherever you like. All virtual race participants will receive a custom event finisher's medal and custom event dri-fit tech shirt.  Please note that all items will not be shipped until after the completion of the event on November 13th.

Starting in 2021 the AZ Veteran's Day Run will honor and recognize each branch of the U.S. Military over the next 5 years. This year we will be honoring the U.S. Army.

The U.S. Army is a uniformed service of the United States and is part of the Department of the Army, which is one of the three military departments of the Department of Defense. The U.S. Army is headed by a civilian senior appointed civil servant, the secretary of the Army and by a chief military officer, the chief of staff of the Army who is also a member of the Joint Chiefs of Staff. It is the largest military branch as of 2020. As a branch of the armed forces, the mission of the U.S. Army is "to fight and win our Nation's wars, by providing prompt, sustained land dominance, across the full range of military operations and the spectrum of conflict, in support of combatant commanders". The branch participates in conflicts worldwide and is the major ground-based offensive and defensive force of the United States.

Race Day Registration will be available beginning at 7:00am.

We accept cash, check or charge on race day.

Stroller friendly event. Strollers MUST start at the back of the pack.

Due to the common start/finish line, there is no bag check for this event.

This event will take place rain or shine. There are no refunds for due to weather.

You can also pickup your packet starting at 7am on race day.