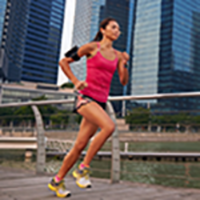 serves Chicago’s Hispanic community, leading it towards an educated, powerful
and prosperous citizenry by engaging and challenging it to redefine its potential
and its legacy in metropolitan Chicago and the United States of America.

The Pilsen neighborhood, located in the Lower West Side of Chicago, is steeped in history. Once an Eastern European immigrant enclave, glimpses of the Old World are still visible as baroque-style architectural buildings stand strong along Ashland Avenue and 18th Street. The neighborhood now boasts a unique, undeniable mix of Mexican culture and modern artistry. Walk down 18th to discover a fusion of authentic restaurants, tortillerias, mercados and local panaderias alongside boutiques, bars and clubs. Lively art galleries, colorful murals and street art can be found throughout the community. No other community in Chicago is as vibrant as Pilsen for hosting a 5k run!EL HORARIO / The Schedule

Once you have registered you will be assigned a packet pick-up location and times which will be announced early-October 2019.

We strongly encourage public transportation as street parking is extremely limited. 18th St Bus and the #9 Ashland Bus are mainly the ones that will leave you close to the event.

Overall winners and runners who finish in the top three of their age division will be awarded a one-of-a-kind “sugar” skull decorated. Runners will be cheered on with entertainment throughout the race course, including live mariachis, traditional folkloric dance groups and Chicago house music DJs. There will also be a post-race party with authentic and delectable Mexican and Latin American food set to music and a traditional Day of the Dead setting. Aside from that, kids activities related to Dia De Los Muertos will also take place after the race.